A recent walk around Mile End uncovered a well-known East End landmark – the vast former premises of Wickhams department store… and, on the same site, what is left of a tiny jeweller’s shop, Spiegelhalter’s. Anyone with an interest in architectural oddities, or who has ever nursed a sneaking appreciation for stories of the small man winning out over ‘the big guys’, should find this post curiously satisfying! 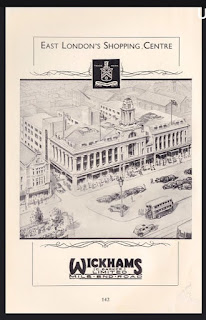 Thomas Wickham began trading as a linen draper in the 1850s selling his wares from 69, 71 and 73 Mile End Road.

No. 75 was occupied by the Spiegelhalter family who owned a jewellery and watchmaking business and had moved from the Black Forest to set up in Whitechapel in 1828. They moved to Mile End Road in 1880 where the business was run by the three Spiegelhalter brothers who had been born on the premises.

As the Wickhams enterprise began to grow, the Spiegelhalters agreed (c.1892) to move from 75 to 81 Mile End Road to allow for expansion of the emporium into no. 75.

Thirty-five years later the Wickham family had further plans for expansion and acquired the entire block, buying up and demolishing a whole row of smaller shops to make way for new, much-enlarged premises. Originally designed to upstage Selfridges, the new Wickhams store was to have a colonnaded front (like the West End store) but also a tower and a clock, which Selfridges could not boast. 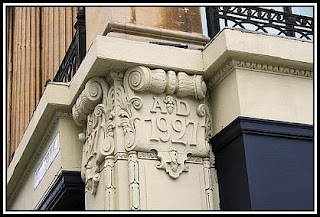 But, famously, the Spiegelhalter family at no. 81 refused to part with their business at any price and their refusal left Wickhams with no other choice but to build their new grand emporium around the little family jeweller’s, which continued to trade when the new Wickhams opened on both sides of it in 1927. By this time the Spiegelhalter family had changed their name by deed poll to Salter (due to anti-German sentiment following the Great War), but the shop always retained its original
name.

The resulting gap in Wickhams frontage looked (and still looks!) a bit like a missing tooth and the tower is slightly off-centre, with 7 bays to the left and 9 to the right, rather than 9 on either side.

Both businesses traded happily side by side for many years. But Spiegelhalter was eventually to have the last laugh. While Wickhams closed its doors in the 1960s, having never achieved anything like the kudos of Selfridges, the German family’s jewellery and clock-making business continues to flourish, albeit in later years away from London’s East End.

The Spiegelhalter’s shop relocated to Loughton in Essex in the late 1970s but that has now closed. The family name and business live on, however, through BJ Spiegelhalter and Son, distant cousins of the original settlers from Baden who today run a business in Penzance, managed by Mark Spiegelhalter.

And what of the Mile End Road building? Until 2005 Spiegelhalter’s shop front, with its curved glass window and mosaic entrance floor spelling out “Spiegelhalters” was still visible (albeit through metal shutters), but the owners of the building have now removed it,  leaving just the front wall of the building. Future plans for it are still uncertain. In the meantime, passers-by along the Mile End Road are still treated to the gap-toothed smile offered by one of this area’s most eccentric landmarks. In his classic 1966 topographical study “Nairn’s London”, Ian Nairn described the Spiegelhalter story as "a perennial triumph for the little man, the blokes who won't conform. May he stay there till the bomb falls."
Well, after a fashion, he has!*

*Postscript! There may be a part two to this blogpost as I was excited during my research to come across an article called “Spiegelhalters and Fehrenbachs – a Black Forest clockmaker dynasty in London and Neukirch”. As my great grandfather’s name was Alois Fehrenbach and he (like Spiegelhalter) was a clockmaker from Baden, I think that’s got to be worth investigating. Hold this page!